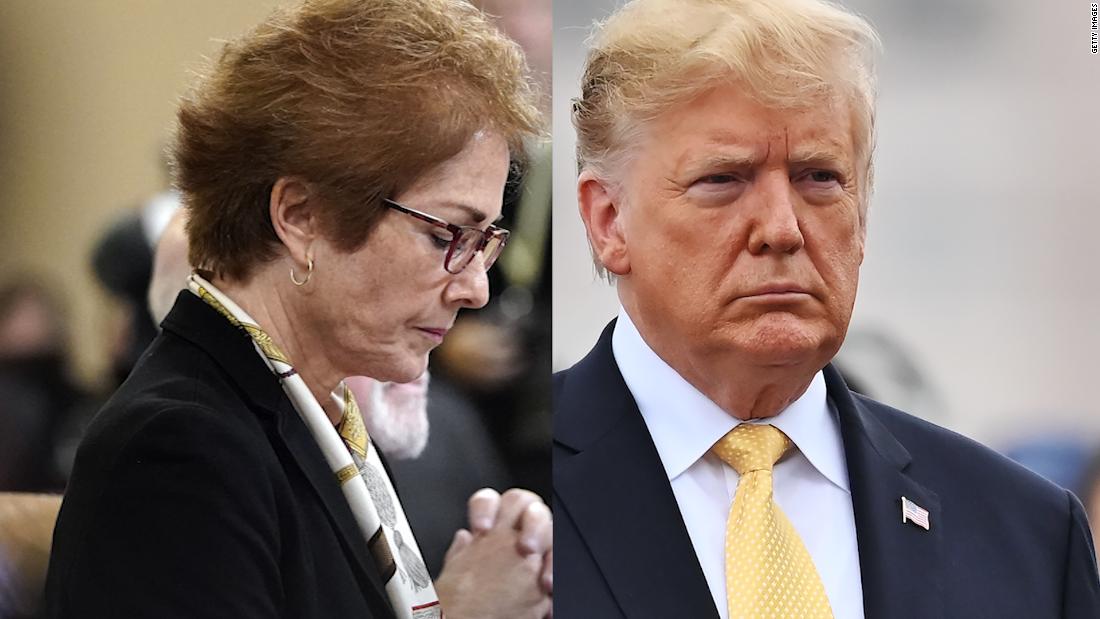 New York (CNN)President Donald Trump was captured on tape at a 2018 dinner with Lev Parnas and Igor Fruman demanding the firing of Marie Yovanovitch, who was then the US ambassador to Ukraine, according to an attorney for Parnas.

"Get rid of her!" a voice appearing to belong to Trump says on the recording, according to ABC News, which on Friday first reported its existence.
"Get her out tomorrow. I don't care. Get her out tomorrow. Take her out. OK? Do it."
CNN has not reviewed the tape.
According to Parnas' attorney, Joseph Bondy, the recording was made by Fruman and shared with Parnas "shortly after it was recorded." An attorney for Fruman declined to comment.
The recording appears to substantiate accounts of the dinner Parnas has provided in interviews, at a time when he has emerged as one of the central figures of the impeachment proceedings against the President.
The conversation appears to have occurred about a year before Yovanovitch was removed from her post in April 2019.
"We do believe that contents of the conversation as portrayed by ABC News are of critical importance in the impeachment trial of the President," Bondy said in a statement. "And would urge that it be produced to Congress."
Asked for comment, White House press secretary Stephanie Grisham said: "Every President in our history has had the right to place people who support his agenda and his policies within his Administration."
The dinner has been the subject of inquiry by New York federal prosecutors, who in October charged Parnas and Fruman with campaign-finance violations. They have pleaded not guilty. Prosecutors are also investigating Rudy Giuliani, Trump's personal attorney, with whom the two Soviet-born businessmen worked to oust Yovanovitch.
Though Trump has repeatedly denied knowing Parnas or Fruman, he has been captured with the pair in interactions beyond the dinner, including in photos from Trump campaign rallies in 2015 and 2016, and at a White House Hanukkah party in 2018.
In November, federal prosecutors questioned Bondy about whether his client had been operating on behalf of Ukrainians at the dinner with Trump when Parnas said the ambassador was bad-mouthing the President, according to people familiar with the matter. On behalf of his client, Bondy rebutted that suggestion, but prosecutors told him they didn't believe Parnas.
Bondy declined to comment on any conversations with prosecutors.
A spokesman for the Manhattan US attorney's office, Nicholas Biase, said regarding the recording: "I cannot confirm or comment on whether the materials exist or are part of discovery in ongoing criminal litigation."
Parnas and Fruman pledged $1 million in donations to America First Action, the pro-Trump super PAC, which gave them access to the intimate April 30, 2018, dinner at the Trump hotel in Washington. They donated $325,000 of their pledge through a company that is a subject of their indictment.
Parnas has previously described the dinner in interviews, saying he witnessed Trump telling a top aide, John DeStefano, to fire the ambassador.
"In the conversation, the subject of Ukraine was brought up," Parnas told CNN in an interview earlier this month. "And I told the President that -- our opinion -- that (Ambassador Yovanovitch) is bad-mouthing him and that she said that he's gonna get impeached -- something like that. I don't know if that's word for word."
Parnas said Trump reacted immediately. "He looked at me, like, got very angry," Parnas recalled, "and basically turned around to John DeStefano, and said, 'Fire her. Get rid of her.'"

Fox News Is No Longer Insane Enough for Fox Viewers

Parents of 545 Children Separated at the Border Cannot...

(NYT) - A new report shows hundreds of cases in which migrant children were taken...

As domestic abuse rises in lockdown, France to fund hotel...

After the restrictions came into force, cases of violence against women have increased,...

Amazon to face U.S. union push in year ahead

(Yahoo News) - Energized by protests at Amazon's U.S. warehouses and a more labor-friendly...

(Common Dreams) - Gov. Gretchen Whitmer has been the target of right-wing ire this...

It can be hard to find affordable living and quality health care in a single retirement...